This page will be updated with video and photo content as the story develops.

Maduro responded on Twitter, writing, “Nerves of Steel! I have spoken with the commanders of all the REDIs and ZODI of the country, who have expressed their total loyalty to the people, to the Constitution and to the fatherland.” 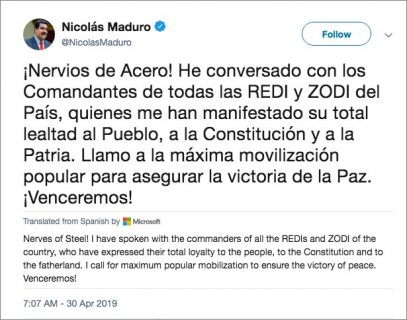 In the following videos, extremely heavy gunfire can be heard as hordes of protesters scramble to get away, military vehicles run over citizens, teargas canisters are shot into crowds and much more.

Huge March of opposition protestors and Pro-Guaido soldiers through the streets of Caracas towards Miraflores #Venezuela pic.twitter.com/Mc44JLekEC

Watch as defected soldiers allegedly fire back at the Venezuelan military in an attempt to protect the protesters.

A ten-year-old boy was knocked unconscious by a tear gas canister in the city of Carabobo, which is two hours away from Caracas.

A 10-year-old was knocked out by tear gas in Carabobo, #Venezuela. It’s about two hours outside of Caracas. #30Abr pic.twitter.com/ypq8xlity1 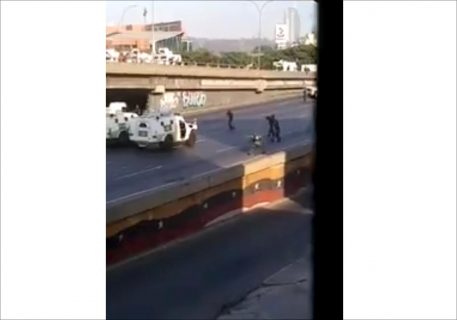 Trish Regan of Fox Business sent out a tweet claiming Venezuelan President Nicolas Maduro shut down public transportation, forcing protesters to walk long distances to join their countrymen in resistance to the regime.

Just in: #Maduro shut down the public transit in #Venezuela so the people are walking to the protests organized by ⁦@jguaido⁩ #OperacionLibertad #SOSVenezuela pic.twitter.com/RaNb7R75sn

Protesters have breached the gate of La Carlota Air Base in Caracas.

President Trump tweeted out support for the people of Venezuela on Tuesday afternoon.

I am monitoring the situation in Venezuela very closely. The United States stands with the People of Venezuela and their Freedom!

White House national security adviser John Bolton said the chaos in Venezula is a “very serious situation” and then called for regime change.

See the unfolding situation below in live footage of the chaotic environment in Caracas, Venezuela:

Thread: some truly shocking images from the unrest in Venezuela pic.twitter.com/KzyPmTcBa8

JUST IN: Venezuela rocked by violent clashes between opposition protesters and security forces still loyal to Nicolas Maduro, in a dramatic escalation of the political crisis that has left the country teetering on the edge of violence for months. https://t.co/3KKBZwT3Ww pic.twitter.com/uFgeVsNhV7

U.S. is the main disruptor of world system. Venezuela was a powerful country in America tow years ago. US intervened to Venezuela interior affairs and recognized #Guaido as new president. US always stands against of international laws when it doesn’t benefits. pic.twitter.com/wJYkZ3wEin

I really feel that #Venezuela pic.twitter.com/9OPFvDSi7C

#OperacionLibertad is underway in #Venezuela & the world is watching. @jguaido’s safety must be guaranteed. The Venezuelan people are demanding change, a peaceful democratic transition, & return to prosperity. It’s time for the illegitimate regime to step aside. #EstamosUnidosVE pic.twitter.com/S1GQGakSul

Solidarity to the people of Venezuela against US imperialism pic.twitter.com/wrLwhAGspo