Just a day after the White House announced the departure of Press Secretary Sarah Sanders, The Washington Post posted a heartwarming tribute to Sanders on its Instagram page. Just kidding. The Post instead followed the lead of cable television; providing nasty commentary describing her as “the queen of gaslighting” and mocking her “curled-lip disdain.”

The Post’s Instagram page features a picture of Sanders accompanied by the phrase “The queen of gaslighting,” with the caption: “farewell to a lying, disrespectful White House press secretary.” 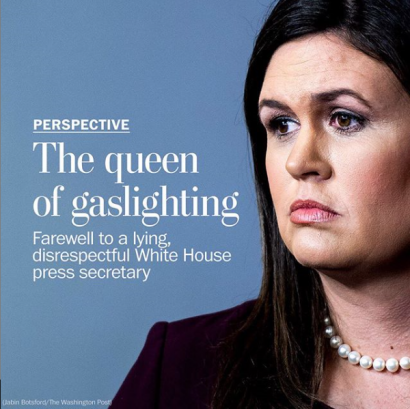 The Instagram post referenced an article by Margaret Sullivan titled “Sarah Sanders was the disdainful Queen of Gaslighting.” The article described gaslighting as a “Sanders specialty” and mirrored the contempt that many in broadcast journalism and Hollywood showed for Sanders upon the announcement of her exit.

According to Sullivan, “she misled reporters or tried to, and through them, misled the American people. And all with her distinctive curled-lip disdain.” Sullivan’s language sounds eerily similar to that of comedian Michelle Wolf, who mocked Sanders for her “smokey eye.”

The goal of the left appears to be not only to demoralize, but also to watch the death of the spirit of America itself. Alex explains how the globalist agenda has always been against those that promote liberty.

Yet despite, and perhaps because of, his earlier cavalier attitude, Trump spent the long holiday weekend bemoaning everything but the tragic roll call of death...

Trump golfs at his Virginia club amid the coronavirus pandemic

Pandemic takes toll on Trump properties while President golfs at one

From threatening to "override" states if they didn't permit the reopening of houses of worship to pressuring states to reopen their businesses to restarting presidential...

Trump threatens to pull Republican convention out of North Carolina

Trump contended that Cooper is "unable to guarantee" that the arena can be filled to capacity."I love the Great State of North Carolina, so much...

Masks, social distancing and other safety precautions have all become a part of the solemn rituals and pageantry at the Tomb of the Unknown Soldier...

The Information Apocalypse Is Here, and Reality Is Losing

CLICK HER TO GOTO THE FULL ARTICLE We've spent more than three years preparing for an information apocalypse. Why couldn't we stop it with the...

GOP Lawmaker to Trump: Stop Promoting Scarborough Conspiracy Theory: ‘It Will Destroy Us’

Crumbs for the Hungry but Windfalls for the Rich

CLICK HER TO GOTO THE FULL ARTICLE Nicholas Kristof: While President Trump and his allies in Congress seek to tighten access to food stamps, they...