Higher education is often considered the first rung in the ladder of success.

That’s why thousands of students flock to top-tier universities around the world, hoping to translate their degrees into financial outcomes. After all, a degree from specific institutions can often mean that a wealthy and secure future is in the books.

With a new fall term just around the corner, today’s chart relies on the third annual Wealth-X report ranking of global universities with the most ultra-high net worth (UHNW) alumni. We’ve also tracked their combined wealth, and how much each UHNW alumni makes on average.

The Wealth-X database defines ultra-high net worth alumni as those who own at least $30 million in assets. In addition, the alumni figures are based on the actual known UHNW individuals from each university, then projected based on the sample size to predict total alumni within the global UHNW population.

One caveat to note is that both bachelor’s and master’s degree-holders have been considered, while UHNW individuals who may have attended more than one university have been counted twice. With that in mind, let’s dive in.

It’s immediately noticeable that a majority of universities on the list are located in the United States, with a high concentration on the East Coast—including the elite Ivy League.

Established in 1636, Harvard dwarfs all its Ivy League counterparts for the richest graduates. Its 13,650 UHNW alumni is double that of second-place Stanford (5,580 UHNW alumni), with twice the total wealth to boot.

One way that Harvard falls short is when average UHNW alumni wealth is considered in this chart, with Stanford beating it by a difference of $170 million per graduate. Regardless, it’s clear Harvard graduates go on to have a significant impact on the world. Notable alumni include political leaders such as former U.S. President Barack Obama, and billionaires such as Michael Bloomberg.

Interestingly, Princeton climbs the charts for total alumni wealth ($1.1 trillion), despite a lower UHNW alumni count of just over 2,000—but this also puts its wealth per graduate at a high of $516 million. Notable alumni from Princeton include Jeff Bezos and Steve Forbes. Meanwhile, Brown and Dartmouth are the only Ivy universities that don’t make the list at all.

Excellence Outside the U.S.

Zooming out, private universities dominate most of this list of richest graduates. In the United Kingdom, Cambridge, Oxford, and the London School of Economics and Political Science (LSE) have over 6,500 UHNW alumni combined. This represents a total of $1.08 trillion in wealth, an average of $174 million per UHNW grad.

Notable alumni and achievements from these institutions include:

*LSE’s label has been misrepresented in the original report as #26 instead of the actual #25.

Nearby in France, the graduate business school Institut Européen d’Administration des Affaires (INSEAD) has a total of 1,956 UHNW alumni and $356 billion in combined wealth—contributed by CEOs of companies like Credit Suisse, Royal Dutch Shell, Ericsson, and Lego.

It’s impressive that the National University of Singapore (NUS) enters the list, with 1,890 UHNW alumni and an average of $46.6 million to their name. Graduates from NUS have gone on to become Singaporean prime ministers and presidents, as well as high-ranking officials in the WHO and UN Security Council.

Here are the full statistics for the top 25 universities worldwide—does yours make the cut? 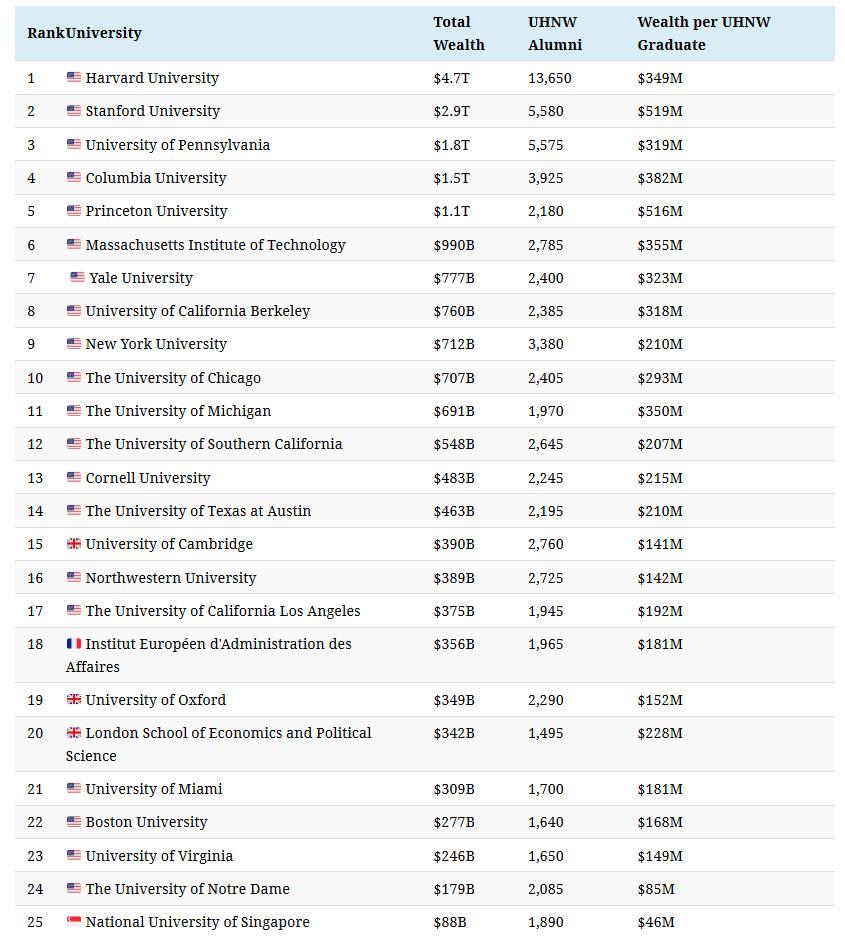 According to the report, a majority of UHNW alumni from these universities are “self-made” millionaires, who became successful through their own efforts rather than relying on family fortune or social status.

Of course, the name of a university is one step to climb on the ladder. What’s often glossed over is how steep the tuition fees at private institutions are, which can rack up significant student debt over time.

Graduates from Boston University, Columbia University, and Northwestern University relied the most on inheritance for their wealth, between 10-12%. A combination of both self-made and inherited wealth sources are also common for UHNW alumni—and it’s not a stretch to say that it helped them pay off debts before focusing on their wealth creation.

Ben Goldey had drafted his letter of resignation on January 6 due to discomfort with the way Boebert reacted to the insurrection and its aftermath,...