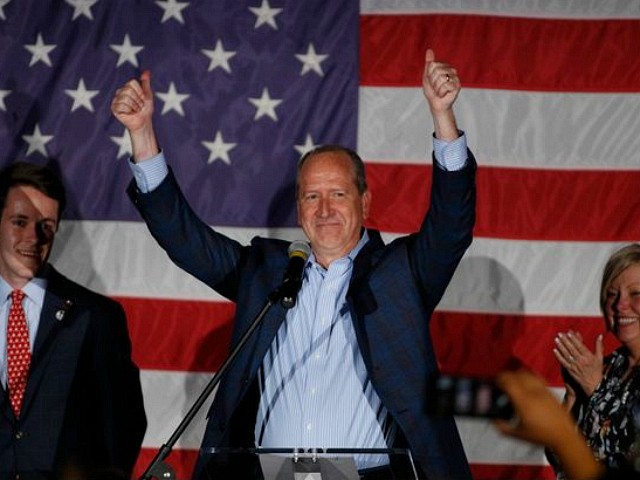 Republican Dan Bishop celebrated his defeat of Democrat Dan McCready in North Carolina’s Ninth Congressional District race Tuesday evening, thanking the president for his support and declaring that North Carolinians sent a message to Washington by saying “no to the radical liberal policies pushed by today’s Democratic Party.”

“WE DID IT #NC09!!!! Thank you North Carolina!!!” Bishop wrote in a tweet, alongside a video showing fireworks at his victory speech:

WE DID IT #NC09!!!! Thank you North Carolina!!! 🇺🇸🇺🇸🇺🇸🇺🇸 pic.twitter.com/hMohQZGl4w

“Tonight, the voters of North Carolina sent a message that shouldn’t just be heard within the confines of the Ninth District. It should reverberate across the country and in the halls of the Capitol,” Bishop said.

“The voters said no to the radical liberal policies being pushed by today’s Democratic Party,” he declared:

“I’m going to Washington to lead that fight on behalf of the Ninth District,” Bishop said before thanking President Donald Trump for leading the charge.

“There’s another man who has been leading that fight for all of America. A man who is — I think undoubtedly — the greatest fighter to occupy the White House, President Donald J. Trump,” Bishop said to applause.

“And look how he laid himself on the line for this race. I’m grateful for the president’s extraordinary support throughout this campaign and especially the closing barnstorm ending with last night’s rally in Fayetteville,” he continued, praising the “successful results of President Trump’s agenda,” such as a “booming economy,” “unemployment across every demographic,” and “lower taxes for our job creators and our families.”

“We’re not tired of winning,” Bishop said. “We have a world leader on the stage … on the world stage who has sent a message loud and clear: America first.”

Bishop pledged that he would vigorously pursue Trump’s America First agenda, promising to push the ratification of the U.S.-Mexico-Canada Agreement as one of his first priorities.

“A strong nation must also be a secure nation. We must secure our borders once and for all,” he continued.

“It’s time for Nancy Pelosi and the Democrats in Washington to stop playing politics with our national security and give the president the money he needs to build the wall,” he added.

President Trump celebrated Bishop’s victory in a series of tweets Tuesday night, writing in part, “BIG NIGHT FOR THE REPUBLICAN PARTY. CONGRATULATIONS TO ALL!”:

Dan Bishop was down 17 points 3 weeks ago. He then asked me for help, we changed his strategy together, and he ran a great race. Big Rally last night. Now it looks like he is going to win. @CNN & @MSNBC are moving their big studio equipment and talent out. Stay tuned!

BIG NIGHT FOR THE REPUBLICAN PARTY. CONGRATULATIONS TO ALL!

.@CNN & @MSNBC were all set to have a BIG victory, until Dan Bishop won North Carolina 09. Now you will hear them barely talk about, or cover, the race. Fake News never wins!

FEMA to restrict exports of critical supplies leaving US

The combined effort between FEMA and US Customs and Border Protection, which oversees trade and travel, comes as the United States seeks to shore up...

What Matters: US Coronavirus predictions are changing. Here’s why

But the main model used by the White House and pretty much everyone else was updated Wednesday to show far fewer projected US deaths from...

The shortage of air cargo space is making it substantially more expensive and more difficult for importers to bring urgently needed medical supplies into the...

"I think this thing that happened with Sen. Gardner and President Trump is very disturbing," the Colorado Democrat told CNN Wednesday evening. "What is the...

While the exact date of the first report remains unclear, sources told CNN that intelligence gathered in November and in the weeks following offered multiple...

By CNN's rough estimate, over the past three weeks Trump has made at least 50 false or misleading claims at these briefings, which in many...

Why Is Trump's IG Purge Not a National Scandal?

CLICK HER TO GOTO THE FULL ARTICLE If, three years ago, President Trump had removed two inspectors general from their posts within a week of...

Obama Tweets about the Need for Robust Coronavirus Testing

Bernie Drops Out of Race

CLICK HER TO GOTO THE FULL ARTICLE Bernie Sanders is ending his presidential campaign, he announced on Wednesday.

CLICK HER TO GOTO THE FULL ARTICLE Bernie Sanders is ending his presidential campaign, he announced on Wednesday.

CLICK HER TO GOTO THE FULL ARTICLE White House press secretary Stephanie Grisham is leaving the job without ever having briefed the press.