Multiple traders told Reuters that Brazilian soybeans are more appealing to commercial importers, especially ones from China, who are looking for deep discounts.

As of last week, Beijing hasn’t lifted 25% tariffs on US soybeans nor granted new waivers to state-owned businesses, indicating that China isn’t ready to buy US agriculture products, as of late October.

China typically sources most of its soybeans from the US between October and January, then from South American countries in early 1Q. But this year, according to traders, as the trade war continues to escalate to the point of return, China is abandoning US markets despite positive sentiment from President Trump’s tweets.

Since Monday, traders said China purchased eight bulk carrier cargoes of soybeans from Brazil, or about 480,000 tons, worth $173 million.

Brazil is China’s top soybean supplier, and Reuters made an interesting point, “large purchases from South America are unusual at this time of year with the US harvest coming in.” Translation: China isn’t buying US soybeans, so President Trump’s tweets about agriculture purchases are meaningless at the moment and are only used to calm fears of Midwest/Central US farmers. 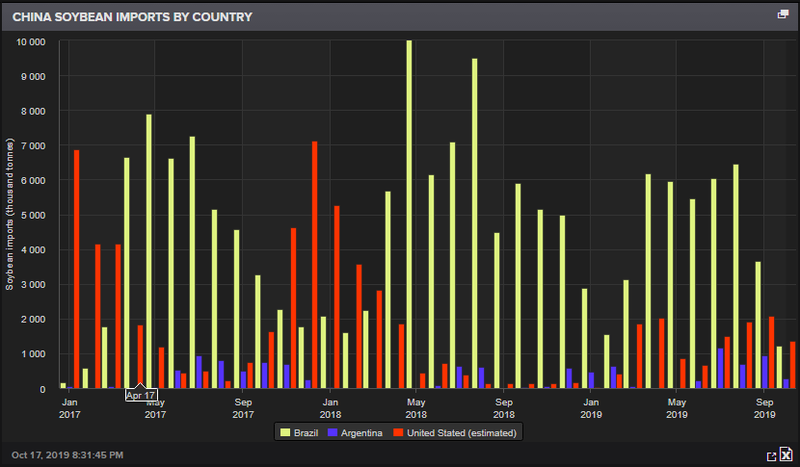 resident Trump and his administration spent several weeks pumping headlines through different wirehouses and even on Twitter, about a breakthrough deal and massive agriculture purchases China was performing.

Three US soybean exporters told Reuters that China logged zero sales with the US last week, along with no transactions at the USDA.

“I’ve not had any inquiries at all for US (shipments),” said one of the US soybean exporters. “There were a few November boats bought from Brazil and several new-crop South American boats for March forward but nothing here.”

Another US exporter said a drop in Brazilian soybean prices triggered boatloads of new purchases by China last week. 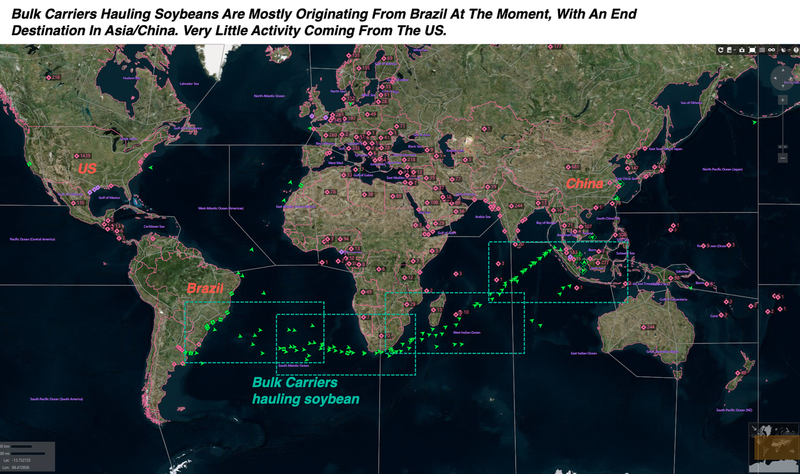 Chinese state-owned firms COFCO and Sinograin, which are exempt from US tariffs, have no intention of purchasing US soybeans unless spot prices drop, said one of the exporters.

After the Trump administration spent several weeks pumping the stock market on headlines describing China repurchasing soybeans, White House economic adviser Larry Kudlow on Thursday finally admitted that for China to buy $50 billion worth of US agriculture good, it would depend on spot prices.

On Tuesday, China said that it would struggle to buy $50 billion of US agriculture products if the Trump administration doesn’t remove retaliatory tariffs on some products. Something that President Trump cannot afford to do because it would allow China to continue its ascension as a global superpower.

LeBron James is facing universal condemnation for bowing down to the Communist Party of China while throwing an NBA general manager under the bus for supporting the Hong Kong protests.

"We have tremendous unity in the party," Trump said of his Supreme Court pick during a campaign rally in Newport News, Virginia, on Friday night,...

The proposals include prosecuting the Ku Klux Klan and Antifa as terrorist organizations, making Juneteenth a federal holiday and efforts to bolster Black economic prosperity....

In conversations with some senior Republican allies on the Hill, the White House is indicating that Barrett is the intended nominee, multiple sources said.All sources...

Ruth Bader Ginsburg in state at US Capitol

The flag-draped casket of Associate Justice Ruth Bader Ginsburg arrives in the Great Hall at the U.S. Supreme Court, on September 23 in Washington, DC....

The measures, which fall far short of a comprehensive proposal, come less than six weeks before the presidential election and serve as a political play...

After Repubs Resign, NC Board of Elections Vote to Make Documents Public