Since when do Washington political reporters sanctimoniously defend a politician’s kid for nonsensical reasons?

NBC News political reporter Jonathan Allen took it upon himself to stand up for Sen. Elizabeth Warren (D-Mass.), a Democratic hopeful in the 2020 race for the White House. In a sharply worded tweet Tuesday, Allen scolded former Florida Republican Gov. Jeb Bush for supposedly badmouthing Warren’s son for his mother’s decision to send him to private school.

He linked to a story in Reason Mag.

JONATHAN ALLEN: “It used to be that politicians drew the line at attacking each other’s children.”

When someone asked how that was an attack on Warren’s child, and that Bush had addressed the lie that the senator keeps telling, Allen replied, “Yes, the lie. That’s a good reason to call out a politician. She lied. She sent one of her kids to private school for half his education but doesn’t believe in private school vouchers! That’s getting at the (now adult) kid for decisions made when he was a kid.”

I don’t even know what that fucking means.

He tried to explain himself but made things worse.

“To clarify, it’s one thing to call out Warren for lying about what she did — and she lied — but that’s not what Bush did,” he wrote.

“Apologies to @JebBush— I’m told his tweet is what automatically populates into a tweet when you click on the link to the piece he tweeted out,” Allen tweeted. “I thought it was out of sync with the way he normally speaks in political realm — whether it is or not, they appear not to be his words.”

When Corey DeAngelis, who wrote the Reason piece and has Warren’s lie on video, wasted Allen for this whole absurd non-event, Allen wrote,”My point was about the politician-on-politician, not you or what you wrote or public schools vs. charter schools vs. private schools. I didn’t realize Bush’s tweet was auto-populated from the link when I tweeted. Not intended as a swipe at you in any way.” 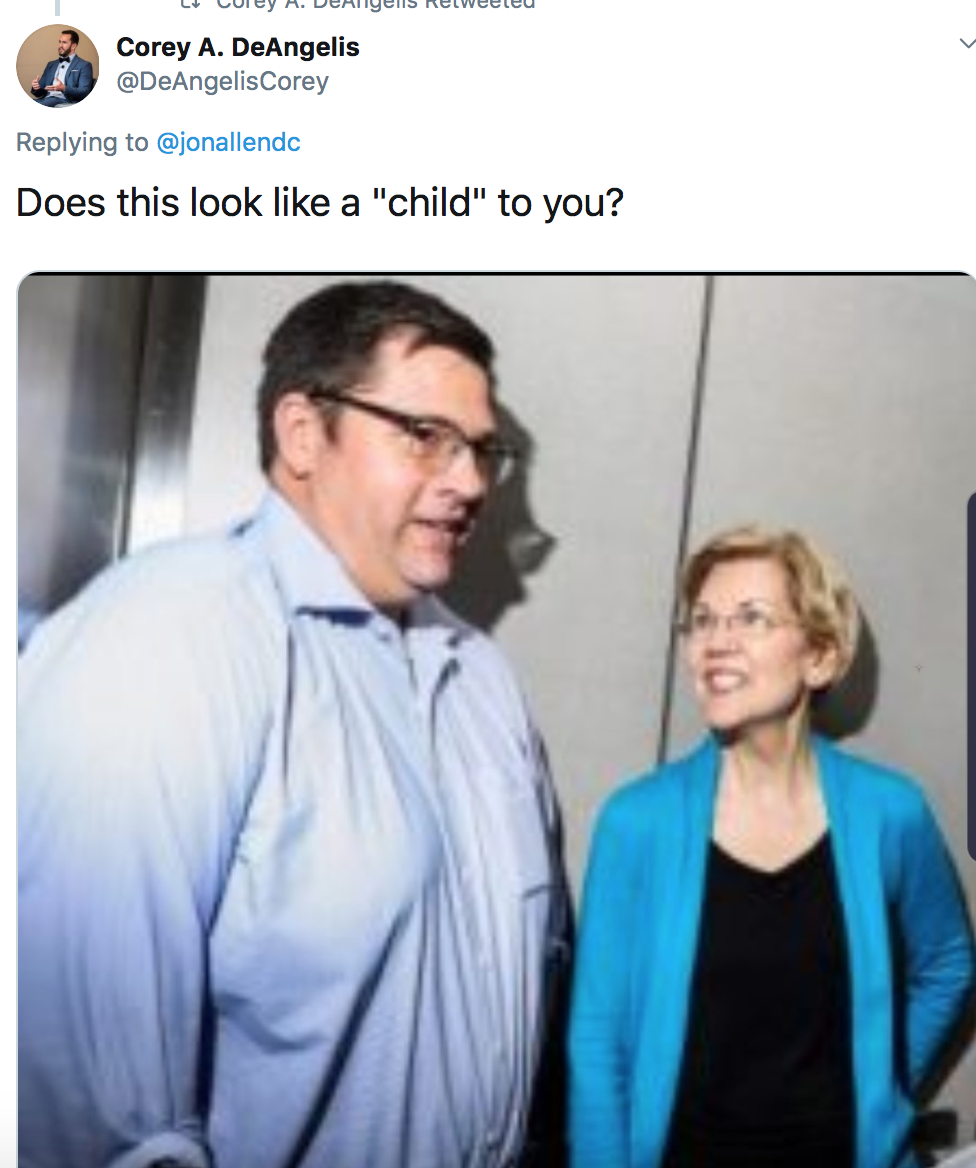 Since Bush apparently auto-tweeted his comment, Allen is fine with it? Either Bush is attacking another politician’s child or he isn’t — and in this case he definitely isn’t.

Sen. Tom Cotton‘s (R-Ala.) aide John Noonan has the super serious title of Senior Counselor for Military & Defense Affairs. So he may know something. He asked, “Where is the attack on the child?”

Allen replied,”It’s the choice to go after sending the kid to a private school rather than what she said to the activist. Most politicians used to refrain from going after each other for how they raised their own kids.”

This is when @NoseofConan jumped in to settle the score: “His giant head is taking up so much space in his butt I can’t even say hello :(”

Allen is a longtime Washington creature and a political reporter through and through. He has worked for numerous Washington publications that have included The Hill and Politico and co-wrote a book on Hillary Rodham Clinton. (RELATED: Journos Clobbered For Wanting More ‘Pizzazz’ In Impeachment Hearing)

But he also took a break from political reporting and spent 40 days working for Rep. Debbie Wasserman Schultz (D-Fla.). He returned to being a reporter because he quickly realized that being a “political insider” might be his jam. But as it turns out, it wasn’t. He said he felt like a “reporter masquerading as a political operative.” Plus, like most of us, he hates meetings.

In my interactions with him, Allen has always been a decent person. So this is not about his decency. He’s nice. He’s decent. He has the reputation of being a smart reporter. He’s not prone to newsroom outbursts or boorishness in a Capitol Hill huddle.

But it is about how easily he was triggered Tuesday morning without thinking things through.

Which appears to be in the water these days.