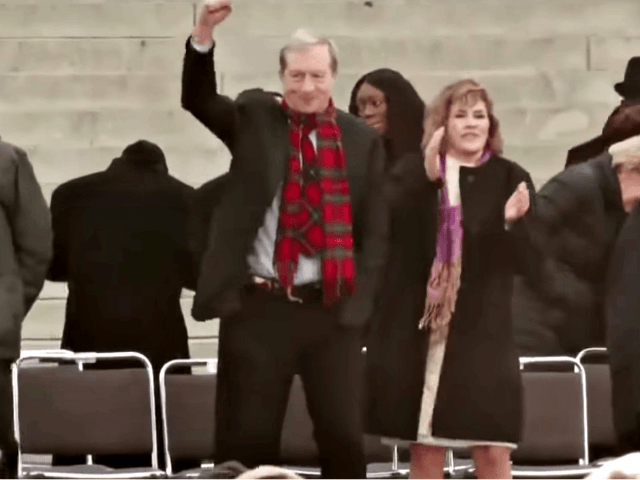 Steyer, along with Sens. Bernie Sanders (I-VT) and Amy Klobuchar (D-MN), danced along to music at a Rev. Martin Luther King, Jr. Day event in Columbia, South Carolina, on Monday. Steyer, at times, was more into the music, pumping his arms and rocking back and forth, as Sanders casually swayed and Klobuchar clapped along:

This is far from the first time Democrat hopefuls have busted a move on the campaign trail. Klobuchar, for instance, made an entrance at the Polk County Democrats Steak Fry, which featured over 10,000 sizzling steaks, by jumping up and down to a drumline. At one point, it appeared she was attempting a version of the “Running Man”:

.@amyklobuchar makes an entrance at the Polk County Steak Fry, stopping to dance with a drum line outside the entrance pic.twitter.com/TZCtqh1JX5

Sanders has also let loose on the campaign trail, dancing at the “Labor Solidarity Dinner” in Manchester, New Hampshire, in November to ABBA’s “Dancing Queen”:

In August, Andrew Yang (D) took a moment to “jazzercise” to “The Cupid Shuffle” during a campaign stop in Beaufort, South Carolina.

“As seriously as Andrew and the team take the issues of this country, that’s why he’s running for president,” Yang’s campaign press secretary Randy Jones said at the time. “It’s also important to not take yourself too seriously all the time and have a little bit of fun”:

Something that just happened here is @AndrewYang did Jazzercise. pic.twitter.com/0p9LLebvTG

Sen. Elizabeth Warren (D-MA) has also garnered attention for her moves on the campaign trail, dancing to Aretha Franklin’s “Respect” at a rally that coincided with Iran launching missile attacks targeting bases housing U.S. troops in Iraq. Sen. Cory Booker (D-NJ) attributed the critiques of her moves to sexism:

Former presidential candidate Julián Castro (D), who appeared alongside Warren as she danced to “Respect,” has also danced on the trail, twirling a woman around as supporters excitedly looked on:

Rep. Tulsi Gabbard (D-HI), who recently caught winter waves in New Hampshire, has also engaged in a bit of light dancing on the trail:

While she no longer has a presence in the race, Sen. Kamala Harris (D-CA) remains one of the most prolific dancers of the crowded 2020 field, busting a move on numerous occasions. She even ended her campaign with a final dance:

The ‘Not Gonna Be President’ shuffle… courtesy of Kamala and Klobuchar pic.twitter.com/YXzoZ8zf0K

When we get tired of speech prep there’s only one thing to do… pic.twitter.com/i7DoT8EwKO

Here she is lifting up our Baltimore staff tonight. Cheers to our leader. pic.twitter.com/Fj5gQ4Xo1o

During a CNN town hall Tuesday, Sanders also argued that his campaign has released "quite as much as any other candidate has" when it comes...