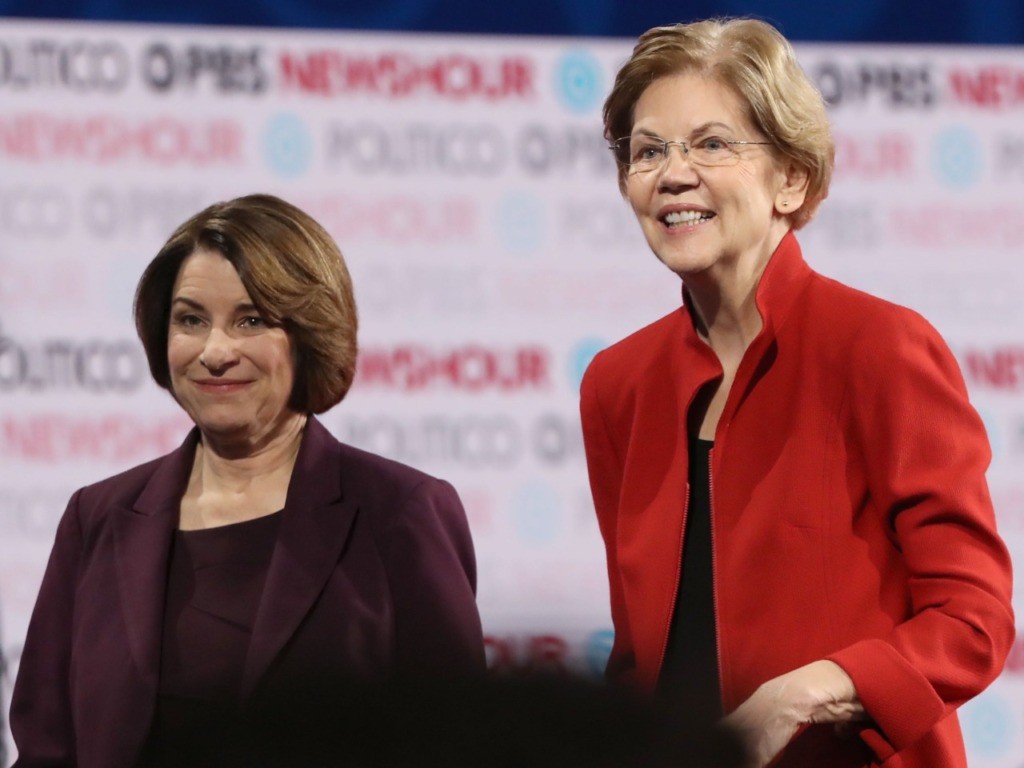 The New York Times announced Sunday evening that it had endorsed Sens. Amy Klobuchar (D-MN) and Elizabeth Warren (D-MA) in a rare dual endorsement for the Democratic Party 2020 presidential nomination.

Klobuchar has struck a more moderate tone than many of the other Democratic candidates — though she still backs the Green New Deal, among other radical initiatives. Warren is among the most left-wing candidates in the race, and has suffered from impressions that she is less than truthful about herself — notably, her supposed Native American origins, which she pretended to have for decades until she was forced recently to retract her claims and apologize.

The Times reached its decision after a series of interviews with each of the candidates, releasing transcripts and videos of each — which often revealed as much about the ideological predilections of the Times editorial board as the candidates themselves.

Sen. Bernie Sanders (I-VT) earned praise from left-wing filmmaker Michael Moore for standing up to the Times, and including it in the array of establishment institutions responsible for the backlash that led to President Donald Trump being elected:

On Sun the NYTimes will endorse its candidate for President. They sat down with each candidate to interview them. During his interview, Bernie wouldn’t suck up. When referring 2 the struggle of the working class, he told them,”Maybe the NY Times has failed them too.” Wow. Truth. https://t.co/nkYDDnlMNz

The Times explained its reasoning for choosing Klobuchar and Warren, saying it was choosing from the best among the “realist” and “radical” models of “progressive” politics:

That’s why we’re endorsing the most effective advocates for each approach. They are Elizabeth Warren and Amy Klobuchar.

Senator Warren is a gifted storyteller. She speaks elegantly of how the economic system is rigged against all but the wealthiest Americans, and of “our chance to rewrite the rules of power in our country,” as she put it in a speech last month.

The senator from Minnesota [Klobuchar] is the very definition of Midwestern charisma, grit and sticktoitiveness. Her lengthy tenure in the Senate and bipartisan credentials would make her a deal maker (a real one) and uniter for the wings of the party — and perhaps the nation.

The endorsement was timed to affect the outcome of the Iowa caucuses Feb. 3 and the New Hampshire primary Feb. 11. It is not clear, however, that the Times endorsements carry any weight at all in the Hawkeye State.

Joel B. Pollak is Senior Editor-at-Large at Breitbart News. He earned an A.B. in Social Studies and Environmental Science and Public Policy from Harvard College, and a J.D. from Harvard Law School. He is a winner of the 2018 Robert Novak Journalism Alumni Fellowship. He is also the co-author of How Trump Won: The Inside Story of a Revolution, which is available from Regnery. Follow him on Twitter at @joelpollak.

When asked his views on the rise of the far right in Europe, Bloomberg warned about the rise of progressive politicians in the US, citing...

Lower courts have consistently opposed the Department of Health and Human Services' desire to block referrals, and reproductive rights groups have pushed back against the...

The case which raises significant religious liberty issues will be heard next term and comes after Justice Anthony Kennedy, who often ruled in favor of...

Sen. Chuck Schumer admits to spending over $8,600 on cheesecake

The New York senator's PAC, Friends of Schumer, paid Junior's Cheesecake in New York for "supporter acknowledgments" in amounts ranging from $46 to $516.45, according...

The biggest wall Trump is building isn’t at the border

The rule is effectively a wealth test for legal immigration, adding new criteria for who can get green cards based on whether they use government...

9 days that could rock the Democratic race for president

But his emergence as the Democrats' undisputed front-runner has set off alarm bells among the party's establishment and intensified the attacks from his moderate rivals,...

CLICK HER TO GOTO THE FULL ARTICLE Purdue offered her another way to pay. Investors -- including wealthy alumni, a hedge fund, and the Purdue...