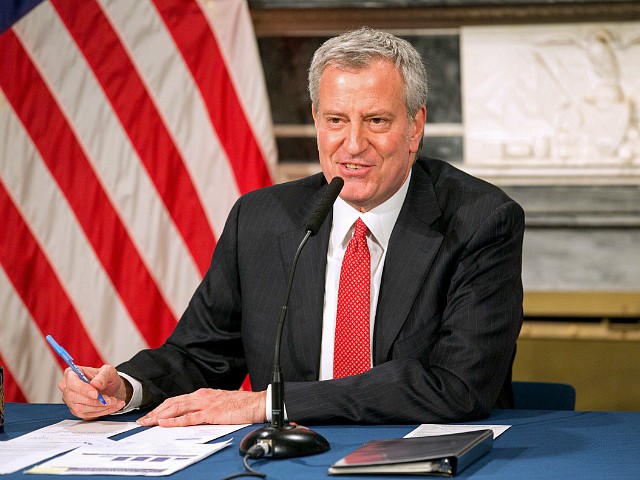 New York City Mayor Bill de Blasio (D) is bragging about the number of inmates he is releasing from prison in the midst of the Chinese coronavirus crisis while car theft skyrockets in the city.

While New York now has nearly 40,000 coronavirus cases and nearly 400 deaths, de Blasio bragged about the increasing number of inmates he is releasing, noting that by Friday morning, about 375 will have been released from city jails and prisons.

“Our city jail population is now 4,906. That’s the fewest detainees we’ve had in our jails since 1949,” de Blasio wrote on Twitter. “By tonight, the number of inmates released in response to the COVID-19 crisis will go from 200 up to 375. We will continue to address this in the safest way possible.”

While it is good news overall crime dropped this week, it is extremely concerning that Grand Larceny Auto rose by 51.5% when an overwhelming majority of New Yorkers are at home with their cars. Cops can’t stay home because criminals won’t. pic.twitter.com/FY9lHJznDe

Aside from de Blasio’s freeing of inmates deemed “non-violent,” New York’s bail reform law has made it impossible for police and judges to hold suspects in jail before their trial if they have been charged with a series of crimes considered “non-violent.”

The bail reform law allows accused criminals to inspect their own crime scenes with their attorneys and mandates that the prosecution hand over all the names of witnesses set to testify against a defendant within two weeks of their arrest.

That specific provision has already been blamed for the murder of a 36-year-old witness who was expected to testify against MS-13 gang members in a criminal trial. The murder occurred after the witness’s name was handed over to attorneys representing the accused.

Federally, a group of 14 Republican and Democrat Senators has pleaded with the Department of Justice to free felons in federal prison who are 60-years-old or older. Their letter claims this particular group of felons are at risk of contracting the coronavirus in prison and thus should be given early release.

Trump’s popularity bump may have already plateaued ahead of schedule

Now that scenario is playing out in real time across the country, exposing the threadbare social safety net in America for minimum-wage workers and amplifying...

Trump says that there could be a shortage of ventilators

When pressed by CNN's Jeremy Diamond at the White House coronavirus task force briefing as to whether there will be a shortage of ventilators in...

The emergency filing marks the first coronavirus-related petition that the justices will review since the pandemic gripped the country. Although the Supreme Court's doors are...

Capt. Brett Crozier was relieved of his command this week by acting US Navy Secretary Thomas Modly, for what Modly called "poor judgment," going outside...