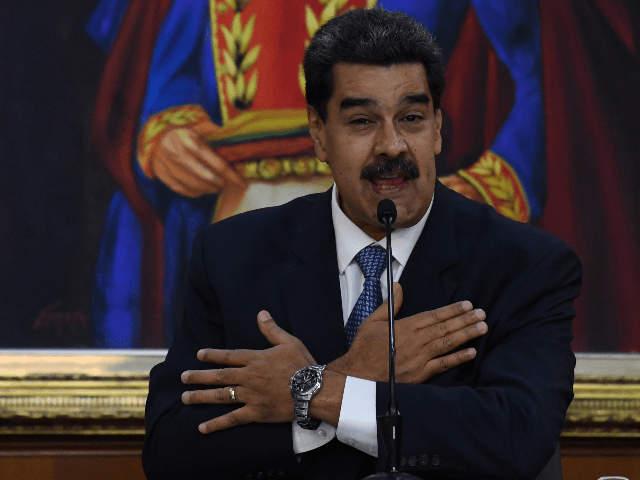 Twitter deleted a post by Venezuelan dictator Nicolás Maduro on Tuesday after he publicly recommended a “natural brew” as a potential cure for the Chinese coronavirus.

Although Maduro did not give details of the supposed cure himself, his tweet announced how the “celebrated Venezuelan scientist,” Sirio Quintero, had sent him three articles about possible coronavirus remedies and kindly gave him permission to share them with the public.

According to Quintero, the coronavirus is a biological weapon in the form of “an intracellular parasite that comes from a strain of HIV-AIDS larvae, crossed with Helminth larvae from Fasciola Hepatica.” He goes on to explain that it was created using “segments of human DNA from embryonic growth and cultured in a laboratory with amniotic fluid from pregnant women.”

No scientific evidence exists for these claims, nor did Quintero provide them.

Quintero also claimed to have found a cure to the viral infection in the form of a natural remedy of ginger, elderberry, black pepper, yellow lemons, and honey that will quickly alleviate symptoms.

The “remedy” was immediately dismissed by the Venezuelan Institute for Scientific Research, who published a statement denying its efficacy. Twitter deleted the post promoting the herbal cure, citing its rules banning the dissemination of false medical advice.

Undeterred, Maduro later used his daily television address to reassert belief in the remedy, falsely describing Quintero as a doctor and revealing that he and his wife have already prepared the remedy for their consumption.

“I trust the doctor, whoever wants to do it, do it, and whoever does not should respect my decision,” he said. “I have already made nine bottles of the preparation with Cilia and as the doctor advises I take it from time to time.”

Quintero, a so-called “doctor,” has no formal medical training, Venezuelan newspaper Tal Cual reported. Nevertheless, Maduro has pledged to invite him to Miraflores Palace to help lead the fight against the coronavirus across the country.

A former ally of late socialist revolutionary Hugo Chávez, Quintero previously argued that Chávez had been inoculated from the aggressive form of cancer that eventually ended his life.

It is not the first time that Maduro has touted a false solution to the coronavirus pandemic. Weeks ago, he falsely claimed that Cuban researchers had found a cure for the virus.

Venezuela is, like most the world, in the midst of a nationwide lockdown aimed at containing its spread. According to the latest figures, the country now has a total of 91 infections, 15 recoveries, and no deaths. However, there remains major concern among health authorities about the potential impact of a mass outbreak, given that Venezuela’s shattered economy and decrepit health care system is hopelessly prepared to effectively deal with thousands of active cases.