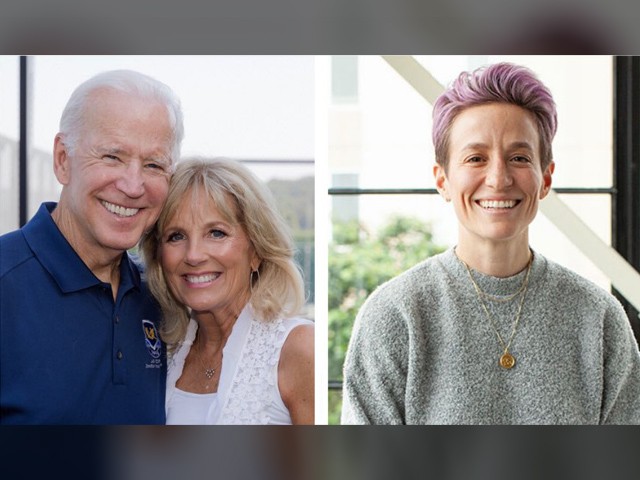 Former Vice President Joe Biden faced no questions about the recent sexual assault allegation leveled against him while taking part in a discussion on Thursday with Megan Rapinoe, the star player of the National Women’s Soccer League and a prominent female empowerment advocate.

The conversation, which touched on a multitude of topics including the Biden family’s support for pay equity, took place as the former vice president is being pressured to address the accusations brought forth last month by Tara Reade, his onetime Senate staffer. Reade, who initially came forward in the last year to accuse Biden of unwanted touching and sexual harassment, now claims that he pushed her up against a wall, forcibly kissed her, and digitally penetrated her in 1993.

In recent days, the accusation has catapulted to the media’s attention, after video surfaced of Reade’s mother calling into CNN to discuss her daughter’s “problems” with working for a “prominent senator.” Even though Reade’s mother did not discuss the exact “problems” and opted not to name either her daughter or Biden during the call, a number of media outlets took the opportunity presented by the video to call on the former vice president to address the allegation directly.

Despite such calls, the former vice president has refused to speak out, even as his campaign has begun arming surrogates with talking points about the allegations. Ahead of Thursday’s interview, many hoped that Rapinoe, a strong champion of #MeToo movement and LGBTQ equality, would be able to coax a response.

That feeling was summed up by viewers at the start of interview, many of whom took to the comments section of Biden’s Instagram feed to make it known they wanted him to discus Reade. Rapinoe, however, did not take the bait and neither Reade nor her accusation were brought up.

Not even a few minutes into Megan Rapinoe’s interview of the Bidens on Instagram and the comment section already has many mentions of Tara Reade.

The decision was surprising given the stance Rapino has taken in the past against elected officials she believed not to be supportive of women. Most notably last year, the soccer player called out Vice President Mike Pence for refusing to meet alone with female colleagues and subordinates unless his wife was present.

“Well, women are afraid to be raped, sexually assaulted, sexually harassed, kept out of jobs, fired from jobs, moved laterally their entire career,” Rapinoe told CNBC in December 2019 when discussing Pence and other men in high positions of power. “Honestly, I call f—–g b——t on that.”