With the current state of coronavirus infections in the US increasingly about political considerations (especially whether a second wave will lead to another round of shutdowns, more economic carnage, millions more unemployed and crush Trump’s re-election chances) and far less about actual epidemiology and standards of care, two ideological camps have emerged – one which tries to overstate the impact of the pandemic in the US by focusing on the recent surge in new cases in sunbelt states (while ignoring the role recent protests and riots played in said surge), and another which, in downplaying the severity of the coronavirus, has been emphasizing the increasing testing which arguably also explains the jump in confirmed covid cases while underscoring the decline in covid-linked fatalities. This divergence is shown in the chart below. 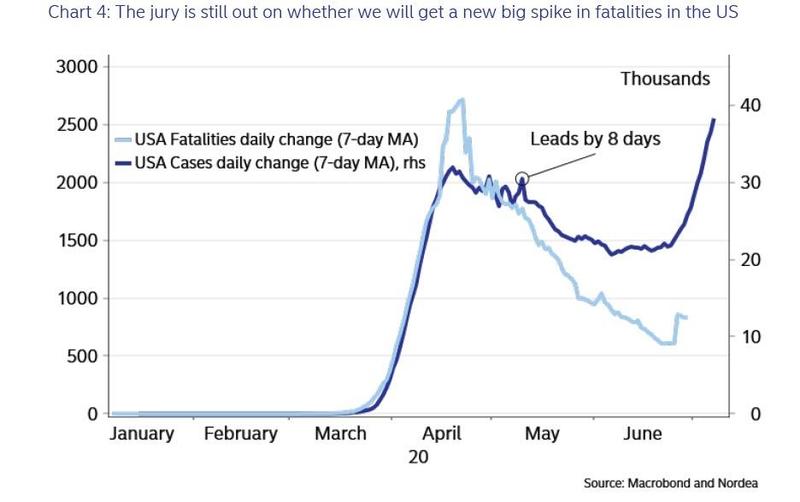 Of course, this is a simplified assessment of the current debate. For a more nuanced take we go to JPM’s Nikolaos Panigirtzoglou who over the weekend wrote that the bank sees little evidence that the virus transmission rate, the so-called R, is increasing at an alarming rate. 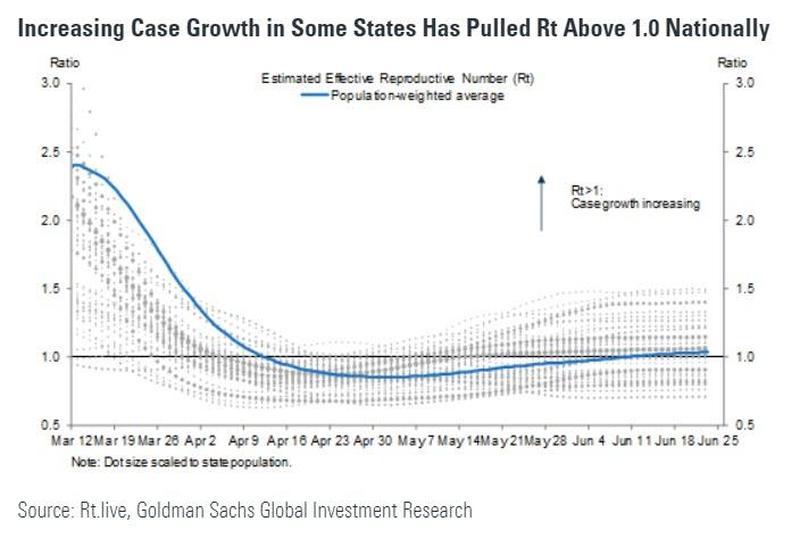 Additionally, the JPM analyst notes that the evidence from China, Western Europe and from the North Eastern US states suggests that higher mobility post-lockdown has not seen a significantly higher R or a significant rise in hospitalizations. Furthermore, “the increase in cases in some Southern and Western US states and some countries such as Brazil or India do not imply a big second wave, but rather a situation where it takes longer for states to come out of the first wave as they either did not as strict lockdowns in place or relaxed them prior to shifting more meaningfully down the virus curve.”

Panigirtzoglou also reminds us that most of the US states reporting significant increases in reported cases have also reported large increases in testing. If we instead focus on hospitalization data from the CDC to gauge severity of the outbreaks, they suggest far more modest increases in most cases. 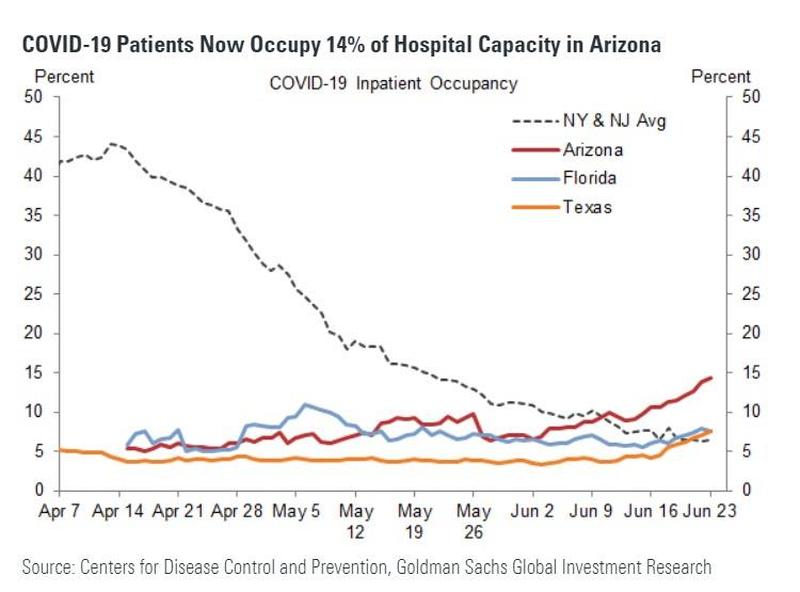 That said, there is a clear reflexivity in behavior in the context of the recent news, and while the severity thus far looks more muted, JPM points out that negative headlines as well as the risk of some roll-back of re-opening measures, as already announced in Texas, California, Arizona and New Jersey could induce more cautious behavior by people and potentially slow the growth recovery going forward. “If this downside risk materializes It would mean that we get more of a U rather than of a V shaped growth trajectory”, according to JPM.

Going back to the original point of “cases vs fatalities”, we hand the mic over to Nordea’s Andreas Steno Larsen who has argued in recent days that despite the recent deterioration in statistics, the US economy is unlikely to see similar shut downs to those experienced in March as the economic cost is simply too large.

As Larsen writes, pointing to the chart at the top, “the new increase in the amount of daily cases on a global scale is yet to morph into a re-increase in the amount of daily fatalities. Fatal cases are currently flatlining or maybe trending slightly upwards around 4-5000 a day. BUT (!), bear in mind that fatal cases are lagging the number of confirmed cases, why the jury is still out.”

The Nordea strategist then proposes that if the amount of fatal cases doesn’t increase more compared to current case count, “it likely reflects either i) that testing capabilities have been ramped up markedly, ii) that the virus is spreading in areas with a younger population (e.g. India and Brazil) or iii) that the CFR (case fatality ratio) is decreasing. We mostly buy into a combo of factor i) and ii).” 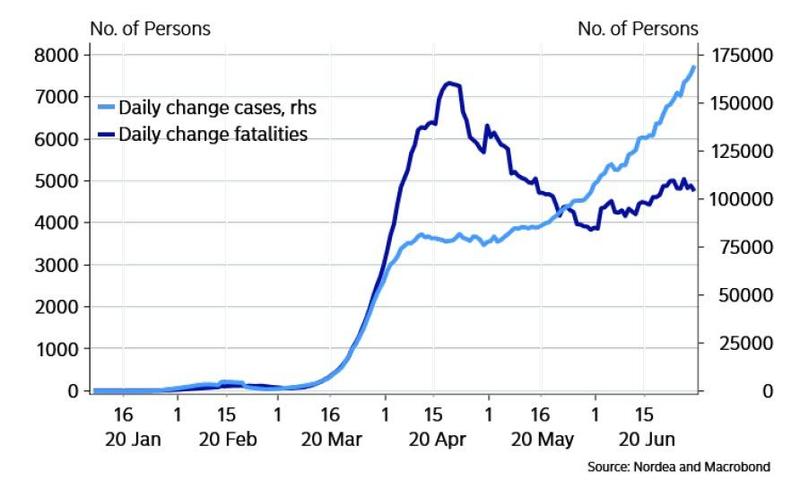 Larsen then echoes JPMorgan, and warning that consumption may take a “lock-down like” hit if the virus spread is not under control, said that a “hammer and dance” strategy (swift total lockdown followed by a wide testing strategy) is ultimately the cheapest medium-term strategy. In this context, Europe is currently outsmarting the US on the Covid-19 strategy as is evident from the recent new case-spike in the US, which has led to setbacks for the re-opening momentum compared to Europe. 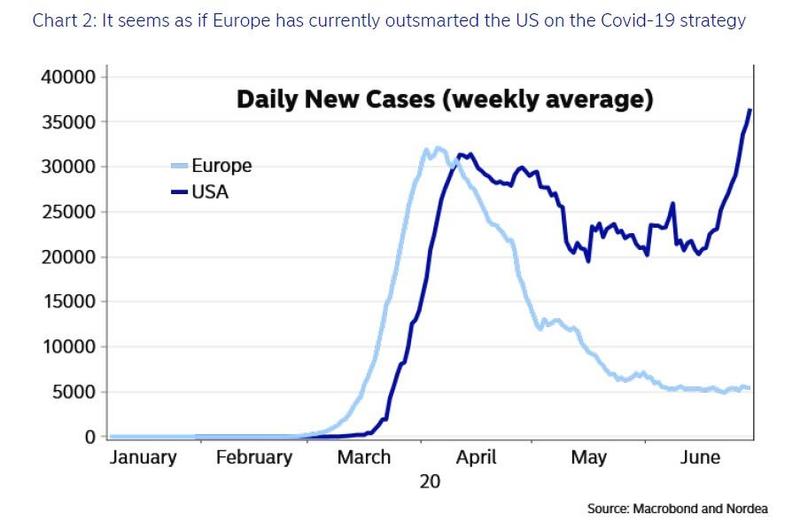 And, just like Panigirtzoglou, Larsen cautions against interpreting the renewed spike as a second wave, since it is mostly a result of a pick-up in cases in states that weren’t hit (materially) initially: “This is rather just the first material wave in areas that were not affected at the outset, while we are thankfully still yet to see a double-spike in e.g. the early epicentres as New York, Lombardia in Italy and Castilla La Nueva in Spain.”

That said, the Nordea strategist says that he doesn’t buy Trump’s message that “increased testing” is behind the case-spike as “the ratio of positive tests to negative tests are on the rise in e.g. Florida and Texas, which is a clear sign that the virus is spreading faster.”

While one may debate that, one thing Larsen is certainly correct about is that “with a clear increase in the virus momentum in Swing states, we would expect a big rhetorical battle between Governors and Trumps administration to be upcoming.” 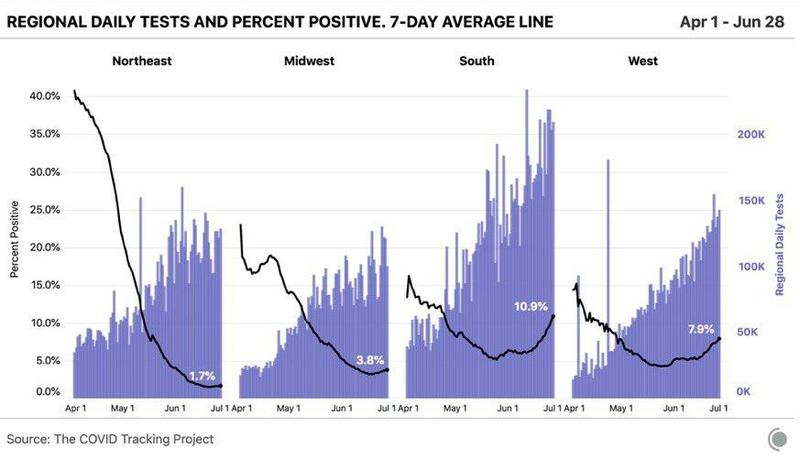 As Larsen summarizes, “we are entering “crunch time” on fatalities since they should start to rise in early July given the lead/lag structure versus new cases.”

If fatalities don’t spike early in July, then people will conclude that it’s probably spreading amongst a part of the population that is not as sensitive, or that it is a resulted of increased testing or that the virus has become less deadly as we move into the summer months. Governors in Texas, California and Florida seem to have concluded that the below correlation holds, but the jury is still out.