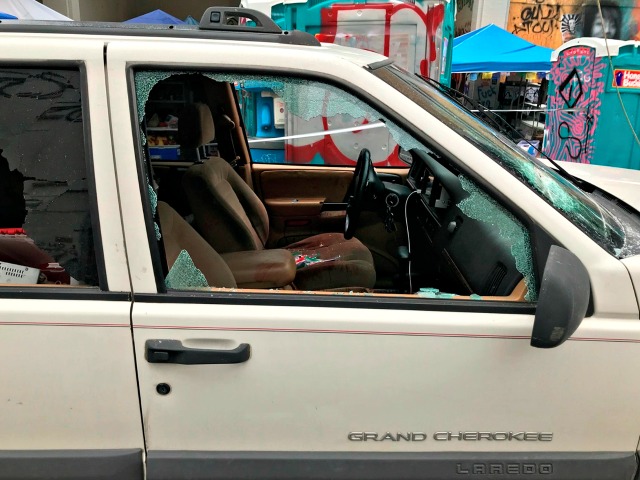 A volunteer medic who responded to two gunshot victims early Monday morning in Seattle’s Capitol Hill Organized Protest (CHOP) said that CHOP security fired at the teens after their vehicle crashed into a barrier, in an incident that resulted in another fatality in the so-called autonomous zone.

A 16-year-old was fatally shot in Seattle’s CHOP early Monday morning, while a 14-year-old remains in critical condition at the Harborview Medical Center. According to the SPD Blotter, SPD’s 911 Center “received multiple calls of shots fired in the area near 12th Avenue and East Pike Street,” as callers “reported observing a white Jeep Cherokee SUV at or near one of the barriers surrounding the Capitol Hill Organized Protest (CHOP) zone just prior to the shooting.”

Marty Jackson, a volunteer medic in CHOP, said he heard the gunshots and saw a white SUV driving speedily. That was followed by additional gunshots. He arrived on the scene and witnessed others attempting to tend to the victims, one of whom was shot in the head. He said he recognized the victims, as they had appeared in the area before.

“He also said the CHOP’s security are the ones who fired on the SUV after it crashed into a concrete barrier,” KUOW reported.

And so when I arrived up there, I see the guy that got shot in the head and I started doing, you know, medical work on him. The guy that I’m working on got shot in the face twice — once in temple, once in the jaw. Probably four or five times in the arm and then once on the side.”

He described the chaos among CHOP medical volunteers and the subsequent difficulty they had in flagging emergency personnel.

“It was a lot by the end of the night … I was covered from head to toe in blood,” he said, further commenting that he feels the CHOP medical staff did not act quickly enough in the situation.

“It’s all because we weren’t going fast enough. I’m shouting ‘put him in a car,’ someone else is shouting ‘no bandage him up.’ I’m like ‘fuck that, he needs to be in a car now.’ Other people are like ‘no he needs to be bandaged first.’ To me, it was communication between the medical staff.”

At the end of the incident, Jackson estimates that about 300 rounds were fired in the CHOP over Monday morning.

Jackson described CHOP as an “active war zone” and advised people against coming to the area. He said:

The exact circumstances that led up to the shooting still remain unclear. Nonetheless, Seattle Police Chief Carmen Best said on Monday that it remains “abundantly clear to our detectives [that] people had been in and out of the car after the shooting” and said that they have been trying to get information from witnesses, although that has proven difficult as “people are not being cooperative for our requests for help.”

Surveillance footage shows a chaotic scene as gunshots rang through the autonomous zone.

As the Seattle Times described:

“Everyone who’s not armed out here, I need them on the ground,” a voice shouts.

However, the Daily Mail reports that those within the CHOP zone claim that CHOP security guards “started shooting at the Jeep only after the teens opened fire on them and drove into a barricade”:

Protesters say the shooting unfolded only after the teens started firing and their vehicle plowed into a CHOP zone barrier. Those inside the zone say CHOP security guards, who are self-appointed and heavily armed, returned fire.

‘The protesters responded quickly with CHOP security returning fire hitting both the driver and passenger in the front seat,’ a CHOP member, only known as Stitch, told DailyMail.com.

An investigation into the fatal shooting is ongoing.

“Things are fluid. We’re not sure who shot at the car or why they shot at the car. Detectives are searching social media and hoping someone, someone has information and will come forward. That’s all we know for now. This is ongoing. Again, it’s very fluid,” Chief Best said following Monday’s deadly incident.

“It’s very unfortunate that we have yet another murder in this area identified as the CHOP. Two African American men dead at a place where they claim to be working for Black Lives Matter, but they’re gone. They’re dead now,” she continued.

“And we’ve had multiple other incidents — assaults, rape, robbery, and shootings,” the police chief added. “And so you know this is something that’s going to need to change. We’re asking that people remove themselves from this area for the safety of the people.”

“I can tell you that I think enough is enough,” Best told reporters.”I can tell you this as an African American woman with uncles and brothers and stuff. I wouldn’t want them to be in this area.”

The father of Horace Lorenzo Anderson — the 19-year-old who was fatally shot in CHOP earlier this month — has called for the end of the autonomous zone, even calling for the National Guard to remove the occupants.

“This doesn’t look like a protest to me no more,” he said. “That just looks like they just took over and said we can take over whenever we want to.”

Chief Best told reporters on Monday that they are “going to figure out how we’re going to get back into this area [CHOP],” although no definitive date for the precinct’s return has been set.