COVID-19 cases are reaching record levels yet again in the U.S., despite most developed countries around the world successfully flattening their curve and reopening without another major wave of infections. One of the big problems in the U.S., Statista’s Willem Roper suggests based on recent data, may be a growing indifference amid a weariness of misinformation and a news cycle dominated by the virus.

In a new survey from the Pew Research Center, nearly 40 percent of U.S. adults in June say the outbreak has been exaggerated – an almost 10 percent increase since April. In terms of political party, respondents who identified as Republican or leaning Republican had the largest increase between April and June, going from 47 percent to 63 percent believing the outbreak has been exaggerated. 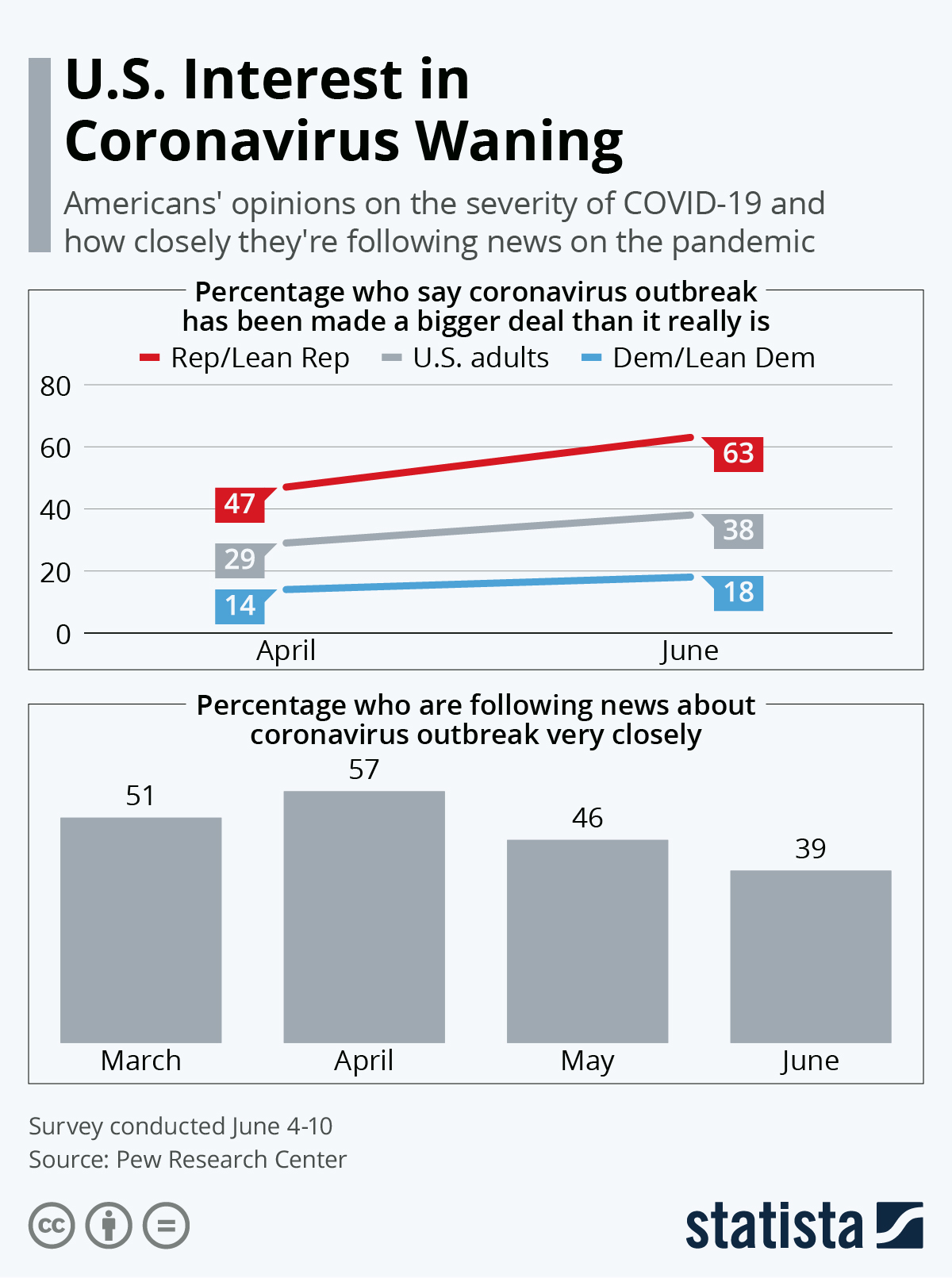 You will find more infographics at Statista

In March and April, Pew recorded that a majority of Americans were closely following updated news on COVID-19 and how it was spreading locally, nationally and globally. Since then, new surveys show Americans’ interest has quickly dissipated, going from 46 percent in May to just 39 percent of U.S. adults saying they’re closely following COVID-19 news in June.

Other data from this Pew survey show how misinformation is coursing through the country, with nearly 40 percent of U.S. adults saying they’re finding it hard to identify truth from fiction regarding COVID-19. A growing percentage of Americans are also paying more attention to the conspiracy that the coronavirus outbreak was planned by “powerful people.”

US Capitol riot: Four police officers who responded to January 6 attack have died by suicide

"Officer Gunther Hashida, assigned to the Emergency Response Team within the Special Operations Division, was found deceased in his residence on Thursday, July 29," department...

Democratic Rep. Alexandria Ocasio-Cortez on Sunday pointed to members of her own party when asked who was to blame for not extending the nationwide order,...

"The House is at recess. People are on vacations. How are we on vacation when we have millions of people who could start to be...

CNN —   Former President Donald Trump pressured acting Attorney General Jeffrey Rosen to declare that the election was corrupt in an attempt to help...

Instead of merely asking Americans to get vaccinated, the President on Thursday is set to take his first step toward requiring it. In afternoon remarks,...

Third Officer who Responded to Insurrection Dies by Suicide

The Rent Is Now Due, America

CLICK HER TO GOTO THE FULL ARTICLE Zachary B. Wolf: Millions of households could face eviction over the next month -- when lawmakers on are...

Killer Whale Stranded on Rugged Shores of an Alaskan Island

CLICK HER TO GOTO THE FULL ARTICLE A Republican lawmaker in Pennsylvania has come out against his colleagues' "forensic" audit of the 2020 election, becoming...

Over Half the Deer in Michigan Exposed to SARS-CoV-2 ?