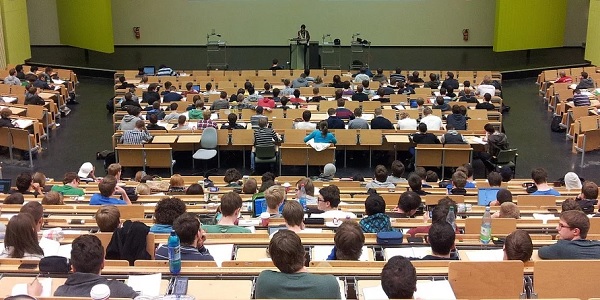 With colleges and universities opening to some degree in just a few short weeks, I was recently asked if I thought that the campus culture wars would continue despite the rise of distance education. My answer remains the same as before COVID-19 engulfed higher education: the so-called culture wars — ranging from cancelling speakers for their viewpoints to attempts to co-opt the curriculum in the name of social justice — are overblown and not student driven. In reality, the media, a core group of activist students, and social justice minded administrators are leading this fight. In general, our nation’s Gen Z students are overwhelmingly centrist, open, tolerant of a wide diversity of views, and are not interested in the protests constantly flaring up on Twitter and social media.

Now, there is compelling new evidence which supports my argument. The Higher Education Research Institute (HERI) just released its 2019 survey report on incoming college first-years and the data is remarkably encouraging. It shows that that students are interested in viewpoint diversity and ideas and not universally hoping to silence dissent. In fact, the data demonstrates that 51% of college students believe that colleges have the right to ban extreme speakers from campus, proving that a large number of students simply reject this notion. It seems students on campuses nationwide are not uniformly interested in shutting down ideas that they find unpleasant.

More specifically, the HERI survey presents a battery of attributes to the students asking if these attitudes are strengths. The responses show an increasing amount of openness to the marketplace of ideas. For instance, when queried about their “openness to having one’s own views challenged,” 67% of the students responded that being open to having their views challenged was an asset of theirs. This is up from 63% in 2013 when this question was first asked and while not a huge increase, the 2019 data shows that two-thirds of first-year students are open to being probed about their ideas and beliefs. 78% of first-years also note that it is a strength of theirs to see the world from someone else’s perspective and this is slightly up from 77% in 2013. This again shows that students have long been interested in and are able to hold and appreciate numerous points of view.

Similarly, when asked about being tolerant of others with different beliefs, 81% saw this as a virtue and these values have not shifted over time. As such, is should be no surprise that 87% maintain that they have the ability to cooperate and work well with a diverse group of people. This has grown from 85% in 2013. Finally, 69% assert that they have the ability to discuss and negotiate controversial issues on campuses and this is almost identical to the 2013 figure. In each case, large majorities of students are open to viewpoint diversity which suggests that despite the polarization of the political system and so much about educational life on campus today, our nation’s students are not nearly as extreme as widely believed.

As for tangible forms of political behavior and action, the HERI survey asks the incoming students about what they intend to do on campus and the data is very clear again: protesting is not dominant whatsoever. Two-thirds of first-year students at the time they were asked in the fall estimate that there is a “very good chance” that they will vote in upcoming elections and a little over a third state that they intended to volunteer or become involved with community service, but just 11% anticipate participating in some form of protest and demonstration. Although the 2019 protest figure is twice the number from the early 1980s and even the early 2010s and the number began to increase by 2015, this percentage of students is a small minority in a very uncertain time with extreme dissatisfaction in the socio-political system.

Finally, the data once again reveal a point that is often lost in the constant criticisms of higher education: Students in our nation’s colleges and universities are not overwhelmingly liberal and there is no leftist student monoculture our campuses. The HERI survey data shows that 37% of these Gen Z students are left of center and this compares to 20% who are right of center. While there are more liberals compared to conservatives, this ratio is nowhere close to the ideological imbalance found among college faculty or administrators. Moreover, the majority of these students identify as middle of the road at 44% and just 7% of all first-year students identify as extremists on the far left or right. Despite, again, deep frustrations with the status quo among the younger voters toward the White House and the leadership in the Senate, these ideological breakdowns have barely moved in the past few years. Even in 2010, during a popular Obama era for younger Americans, 46% of first-year students were middle of the road compared to 30% on the left and 24% on the right; there is no liberal student dominance among incoming college campuses at all.

These new data from HERI report on incoming first years who began the collegiate experiences in the fall of 2019 and lived through quite a bit of political chaos while in high school and completed their first year away from campus, virtually. I had the pleasure of teaching these students on my campus and meeting many around the country. What was immediately clear in my classes and lectures has been confirmed by the HERI data: These students are simply not extremists or ideological purists.

Our nation’s rising sophomores — like most upper-class students — are open-minded, tolerant, practical with their hearts and minds curious and compassionate. While we may see petitions and various extremist videos on Tik-Tok and Twitter, virtual classes may be hacked, and statements will be taken out of context, this does not represent the political and intellectual realities for students who crave viewpoint diversity and thrive in environments with varied understandings of the world.

Samuel J. Abrams is professor of politics at Sarah Lawrence College and a visiting scholar at the American Enterprise Institute.

Ben Goldey had drafted his letter of resignation on January 6 due to discomfort with the way Boebert reacted to the insurrection and its aftermath,...