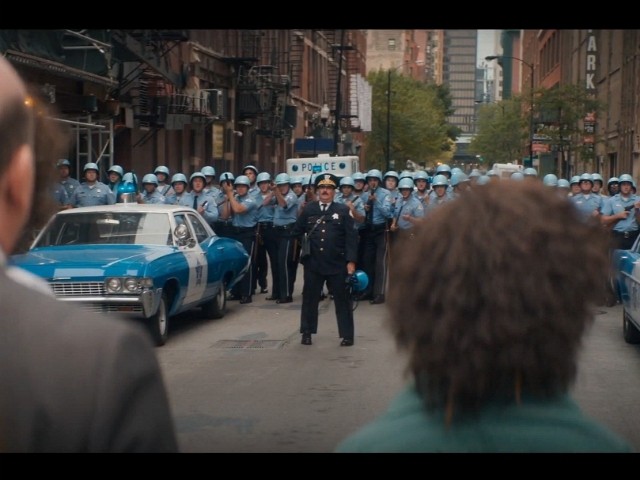 Netflix’s upcoming movie The Trial of the Chicago 7 takes place at the height of the anti-Vietnam War protests during the late 60s. But the first trailer bears an unmistakable resemblance to today’s Black Lives Matter protests and features a distinctly anti-police tone.

The Trial of the Chicago 7, written and directed by Aaron Sorkin, tells the story of the seven radical-left defendants accused of inciting riots during the 1968 Democratic National Convention. The movie stars Sacha Baron Cohen as Abbie Hoffman,  Eddie Redmayne as Tom Hayden, and Succession‘s Jeremy Strong as Jerry Rubin.

The trailer invokes today’s BLM riots with scenes showing a line of police officers preparing to open fire on protestors who are carrying signs that read “An Attack Against One Is An Attack Against All” and “Where Are Our Civil Rights?” Throughout the trailer, the protestors chant, “The whole world is watching!”

In one scene, a character says he is done with peaceful protesting, following the assassinations of Martin Luther King, Jr., and Robert Kennedy. “They tried it peacefully. We’re going to try something else.”

Netflix, which has a production deal with Barack and Michelle Obama, is planning to release the movie digitally on October 16. The movie was originally going to be released by Paramount Pictures before the coronavirus shutdown prompted the switch to Netflix.

Aaron Sorkin, who has publicly called President Trump “staggeringly, breathtakingly dumb,” is reuniting with The West Wing cast for an HBO Max special that will raise money for When We All Vote, the Michelle Obama organization that is moving aggressively to register young voters and to push vote by mail.

Netflix is currently embroiled in a controversy over its kiddie twerking drama Cuties, which features sexually charged scenes of underage girls. The movie has drawn condemnation from Republican and Democrat members of Congress who demanding the streamer explain why it released the title.

Your big questions about voting and the 2020 election, answered

But those plans were scrapped by the White House because it didn't want to spark "concern or panic" among Americans, senior administration officials told The...

“I don’t trust the President on vaccines. I trust Dr. Fauci”

Supporters of President Donald Trump share a laugh as they wait for the president to participate in a Latinos for Trump Coalition roundtable on Monday,...

Ask us your questions about voting

(CNN)The pandemic has reshaped the American election process this year. Do you have questions about registering or voting, whether in person or by mail? Are...

"Name one successful organization or institution where the lowest level employees' decisions are deemed sacrosanct, there aren't," Barr said of alleged unhappiness within the Department...

But without detailed federal guidance, states and cities remain divided, and some of them stifled, on how to best to use those types of rapid...

AT&amp;T Wants to Put Ads on Your Smartphone for $5 Discount

CLICK HER TO GOTO THE FULL ARTICLE AT&T CEO: Customers would accept targeted ads if given $5 or $10 price cut.

CLICK HER TO GOTO THE FULL ARTICLE US Attorney General William Barr yesterday compared lockdown orders to slavery, saying that measures to fight the COVID-19...

America’s Global Reputation Has Plummeted in the COVID Era