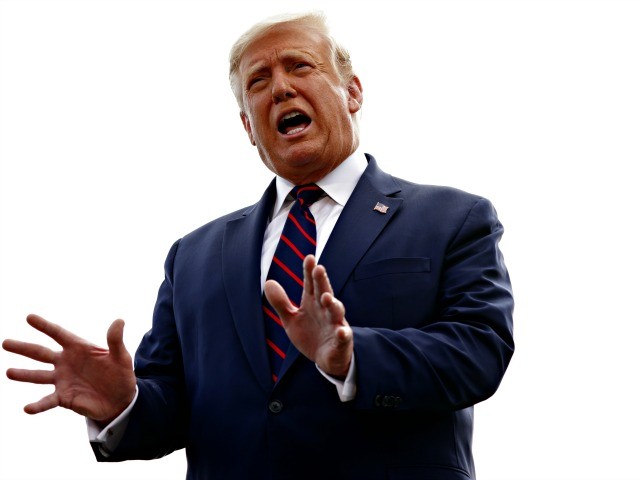 President Donald Trump on Tuesday repeated that he did not want to issue a national mask mandate during the coronavirus pandemic.

The president commented on masks after a voter from an ABC News town hall hosted by George Stephanopoulos asked him why he did not support a national mask mandate.

He recalled witnessing waiters serving at a restaurant touching their masks to adjust them and then touching the plates.

“The concept of a mask is good, but … you are constantly touching it, touching your face, touching plates,” he said. “There are people that don’t think masks are good.”

Trump recalled that former Vice President Joe Biden called for a national mask mandate during his convention speech, but backtracked on the idea.

“They checked out and they didn’t do it,” he said.

Trump also defended his initial response to the virus, despite complaints that he downplayed its deadly nature at the beginning of the crisis.

“I didn’t downplay it,” Trump said. “I actually, in many ways, I up-played it in terms of action.”

He argued that his decision to ban travel from China saved millions of lives, at a time when Democrats criticized the idea.

“I was so far ahead of my closing,” he said, noting that Biden was talking about the threat as exaggerated and former House Speaker Nancy Pelosi was calling for people to come visit Chinatown in San Francisco.

He also defended his statement that the virus would disappear.

“It’s going to disappear, George,” he said. “We’re going to get back.”

He said that the development of vaccines and herd immunity would help the virus go away.

“It’s going to be herd development, and that’s going to happen. that will all happen,” he said. “But with a vaccine, I think it will go away very quickly.”

Harris did not interact with Hostin or Navarro before the show, according to a White House official. Harris went on to conduct the interview from...

The subpoenas come as the select committee seeks to investigate efforts the Trump White House took to potentially overturn the 2020 presidential election and how...

CLICK HER TO GOTO THE FULL ARTICLE Billionaires sit on vast pools of money and assets, and only a tiny portion of their wealth goes...